This article is about the cancelled NSMBX by Marco Benacchio. For the current version by Core built on top of TheXTech, see New Super Mario Bros. X.

Super Mario Bros: Remastered (originally named New Super Mario Bros. X, also known as Super Mario Bros. X Remastered, SMB:R and SMBX:R) was one of the first attempts to continue SMBX after Redigit canceled it.[1] "SMB:R" had the most publicity in the months of June-September 2011, so it developed the largest community of the smaller spin-off forums, despite not having much progress beyond what was publicized. This large community eventually merged with Cloud's forum amidst controversy with whether or not it would merge with Knux's forum and became SMBX Revived, but continued to grow and was (post and traffic-wise) the second-largest SMBX forum. After merging with Cloud's forum, SMBX Revived became the most active forum, beating Knux's forum. Unfortunately, Project has been canceled in January of 2012. NSMBX Forums was kept as a backup discussion platform which was sometimes used while the official SMBX forums server is down. 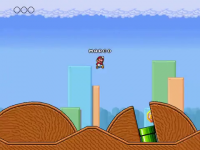 Marco Benacchio started developing NSMBX ("New Super Mario Bros. X") on June 2011.[1] The first demo was released on 19 June 2011, showing some features of the game, like a nickname above Mario, rotating blocks and Comet Medals (From "Super Mario Galaxy 2" But working as NSMBWii Star Coins) [2][3]. In September 2011, a blog-post presented the NSMBX Forums.[4]

After Marco Bennaccio quit the development in October 2011, supermarioman and XerX/Rexx took over the project.[5] In the same month, it was renamed to "Super Mario Bros: Remastered", because the user Yoshisland claimed to have used the NSMBX name prior.[6]. In January 2012, it was announced that the project would become open source[7][8], but in the same month, it ended up being abandoned. [9] The NSMBX Forums remained active until 2016, however, it would no longer serve as a place to discuss SMB:R.[10]

NSMBX Forums was kept as a backup discussion platform which was sometimes used while the official SMBX forums server is down. In September 18, 2016, the owner of NSMBX Forums announced the closing of forums with locking current state for read-only[11].

In April 2020, the NSMBX Project was revived by Core, who moved the development over to TheXTech's engine, and later, using Love2D.[12]