Debugger (also known as "Debugger box") is a special toolbox in both SMBX and Moondust Project, which allows you to see general information about the current level (and world map in PGE).

To access Debugger in SMBX Level Editor, look at the top, press "View" and press "Debugger". The same goes for Moondust Editor. 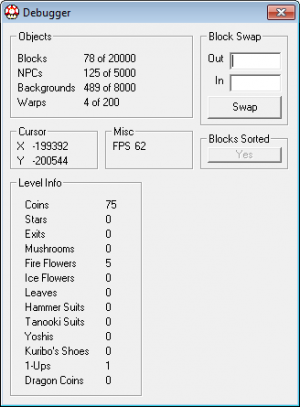 The "Blocks Sorted" button in the Debugger box of SMBX can be used if you want to make messed up NPC collisions, so they will fall through blocks. The button will be activated when you will place some blocks in the level.[1]

"Block sorting" means the internal sorting of the list which has all placed blocks in the current level. All blocks should be sorted with X and Y coordinates. SMBX is using this internal collision detection algorithm with NPCs, which are trying to find the nearest block to check collisions with it. If the block array won't be sorted, NPCs will fall down or walk through some blocks. But the player will collide with those blocks, so he won't fall through them.[1]

If you want to make this effect in your level, follow these steps:

2) After play-testing, open the level file in Notepad, cut blocks from the top of the list (after player spawn points definition and before blocks located in another section), and paste them into the bottom of the list (before first "next" label).

3) When you're done, open the level again and test the level. SMBX will ask you if you want to save the level, when it will do that, always press No or else your notepad changes will be lost.

Note: If you will place some block in the level while play-testing the level, you will be able to press that "Blocks Sorted" button in the Debugger box, which will return things back to normal if pressed.

There is no Debugger box for World Map mode, maybe it was planned to appear in future updates of SMBX. However, in World Map mode you can see your current mouse position below, which is useful to make World Map warps or warps between level and world map. 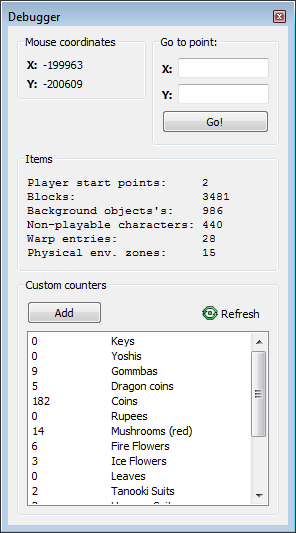 The debugger in the latest stable version of Moondust Editor allows you to:

Since some limits in the Debugger box of SMBX are not correct, read about the real limits of SMBX64 Standard here: SMBX64#Limits