This is perhaps the quintessential forum game. In my opinion it's also one of the most fun ones to play.

Corrupt-A-Wish is a game where someone posts a wish, and you "grant" it, but with an unexpected, unpleasant twist to it. And then you make your own wish for others to corrupt.

How To Play
- First, you "grant" the wish of the guy who posted before you. Simply saying "Granted" is good enough.
- Then, you corrupt it, by saying how it's corrupted. You can make the wish backfire, you can make something happen that ruins the wish, you can exploit a loophole in the phrasing of the wish, anything goes really. Just... make your corruption make sense, please.
- Then, you make your own wish, to keep the game running.

I wish i could fly.

Granted, you are now a mosquito.

I wish Half-Life 3 would be released.

I wish for Christmas not to be secular.

The goal isn't to make a foolproof uncorruptable wish. Not only do those wishes have the potential to ruin the game, but they also tend to be quite bland, both in the wish itself and in how it's corrupted. The point of the game is to be as clever and creative as possible. There's no winners or losers here.

Off-topic discussions are a bad idea, so try not to start them. Like with virtually any forum-game, this one's main weakness is being derailed. I know it tends to be tempting to start a discussion about, for instance, a particular wish or how it's corrupted, but try not to. However, there's one exception:

Side-discussion is okay, however. That's the one exception to the above rule; you may have off-topic discussion as long as you keep the game going in every post. As long as every post corrupts the previous post's wish, and contains a new wish to corrupt, you may put pretty much anything else in there.

Don't forget to make a wish. This is the easiest mistake to make. If you really want to play, but can't think of a wish, try thinking of something you wish you had in real life.

If someone does forget to make a wish, and doesn't edit a wish into his and/or her post within an hour, you may assume that he's not going to. To keep the game running, you may post a wish of your own.

I wish there was a YouTube Poop of The Stanley Parable. 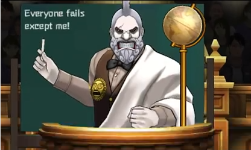 Granted. But the video lasts for a second.

Granted, you must now be addicted to it for a month.

I wish I had a pet Yoshi.

I wanna become an Admin!
Alex at your service!

Granted. But you have to share your admin power with everyone.

Granted. You have 120 soups of poison mushroom that you have to eat.

I want a maid.
Alex at your service!

Granted. But you can only have me as your sexy maid But your maid has to have angel-like wings and a fat-bird body.

I want to be able to travel through time.

Granted. But you can only travel forward in time.


I want a hot boyfriend.

Granted. He will totally burn up in a minute.

I want Elsa in a comic.
Alex at your service!

Granted. But the comic will only consist of 4 panels.

I want to have Raster's autograph.

Granted, but it's wet and tears up when you grab it.

I wish the TGCA remake I'm making was released now.

Granted, but it was released incomplete.

I wish a glass of water.
Do you want fries with that?

Granted. But it is pretty cold for you to drink it.

I want some pizza.

Granted. You have box of rotten pizza.

I want the best avatar in the world.
Alex at your service!

Granted, but you were sued for copyright infringement.

I wish I could program nicely in C++.
Do you want fries with that?

Granted, it will be hard as hell for you.

I want to have some cheese.
<Knux> h2643 the super computer

Granted. But you're stuck as a mouse forever.

Granted but every time you touch water your skin burns.

I wish I had more motivation to work on gfx, levels, etc.

Granted, but now you got so many ideas that you can't even put your one into practice.

I wish garbage.
Do you want fries with that?

Granted, but it's 100% hygienical garbage that smells of flowers.