Visual Super Mario Bros. X was a project by GhostHawk to recreate Super Mario Bros. X and then add new features with more flexibility. The project was publicly announced on the SMBX forums on May 20, 2014, featuring progress on a level editor. The project became open source December 25, 2014, after previously being withheld for protecting the name. Development focus was on building a stable level editor that resembled SMBX v1.3's UI. All blocks, background objects, and NPCs could be placed in a level. Levels could be saved and loaded, most level backgrounds were implemented as well as music from SMBX v1.3. Development began to dwindle after the start of game-play development. Players could move, and jump around a level, however, nothing beyond basic block collision and simple NPC AI was ever implemented. VSMBX Beta 1.0.2 was the final version released and the project became defunct on August 3, 2016[1]. Platformer Game Engine became integrated into SMBX thus making other attempts obsolete, and development of VSMBX never resumed. However, June 29, 2019, GhostHawk have announced resume of the work, but as unrelated to SMBX project with different scope[2]. Project was renamed into Super Basic Mario Editor. 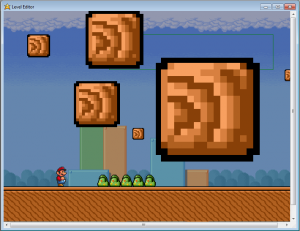 Attempts were made prior to the official release of Visual Super Mario Bros. X which only amounted to basic functions including block placement, moving the camera, and poorly optimized saving and loading of level data. After the official announcement in the main VSMBX thread, serious development began with more rigorous and ambitious project goals. By the time development halted, several features were present in the level editor: