This is a guide that will provide an overview for building PGE for your specific operating system.

Firstly, you will need to download all required sources:

Clone the repository with the following commands:

Tip: If you have a slow network connection, you can speed-up the cloning process by using the "--depth=1" flag. To use a SSH-based url you must be logged into GitHub.

If you failed to clone the repo you can alternatively download all of the sources as a single ZIP: 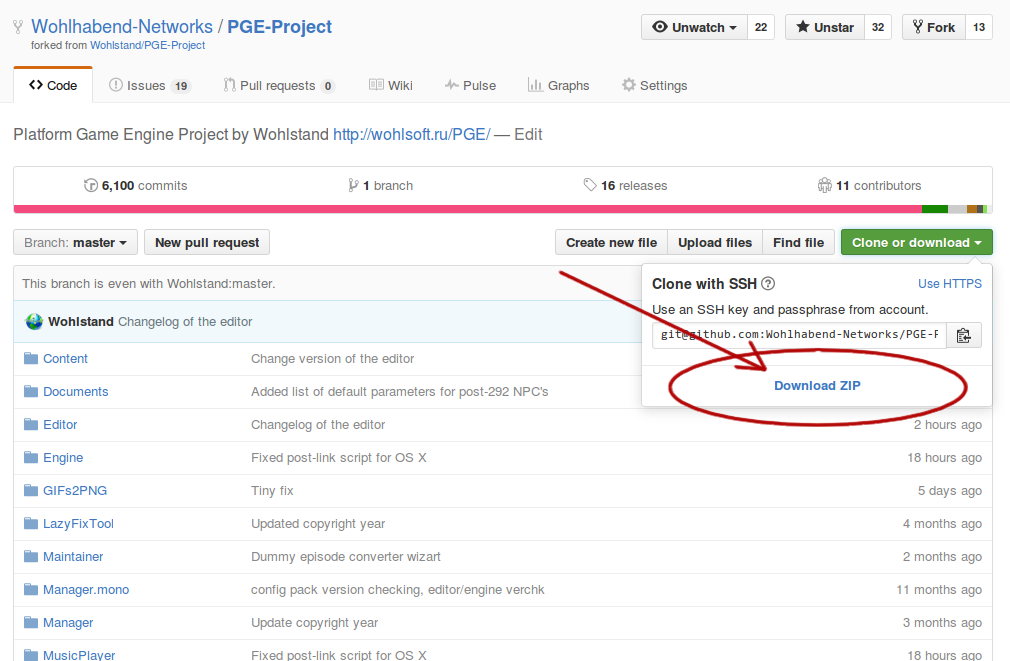 Next, download the submodule dependencies and place them into their folders. (Without these submodules, PGE is not buildable!):

Now download any configuration package (that contains media such as graphics, music and sounds) that is known to work with the latest laboratory version of PGE:

Optional: Installing the ccache package is possible to speed up the building process

To get Qt installed you have two options.

The first is to Qt5 packages from your distribution's repositories or you can download it from the following page:

Note: You need to make an account there in order to download. More download options will be visible if you open the "View all downloads" page.

If you download the necessary packages from the official Qt project's site you should set "executable" permission in a terminal to get a runnable install for Qt's installation.

Once you're finished, don't forget to check if Qt is installed to "/opt/Qt/"

If you get a return messsage such as the following, congrats! Everything is successful up to this point ;-)

Make sure you have the following folder tree.

To start building, use the build.sh script:

Once everything has finished building, you should now be able to see the built executubles in the ./build-pge-cmake-release/bin folder.

Now if you'd like to start the PGE editor, run the pge_editor file

It's possible to pack your build in order to use it on other systems without rebuilding. To do this, run the "./build.sh deploy" command from the repository root:

Once the deploy process has finished you'll get something such as "bin-cmake-release/pge_project-linux-64.tar.bz2". Ta-da! You now have a file that allows you to share or use your compiled build on other systems.

Lua-API documentation is written in the source code directly. It can be converted into friendly and brows-able set of HTMLs that can be used.

After you have installed all dependencies and built the project, run next command to run documentation build:

On successful work you will found the compiled documentation in Engine/doc/doc folder.

Installation of the development tools

Install all the tools in a folder, for example, C:\DevTools.

Qt installation Note: you must enable those components:

Other components are optional and doesn't required

If you want to build 64-bit version, you must have 64-bit Qt for MinGW which is not available officially, however, you can build it youtself. Since Qt 5.12.0, 64-bit Qt builds for MinGW are shipped officially.

Important note: Qt since 5.8 no more supports Windows XP. Therefore Editor, Maintainer and Calibrator are built with Qt >= 5.8 will fail with "CancelIoEx not found in the kernel32.dll" error. If you want to support Windows XP, please install the Qt of 5.7 version or older.

You must have this tree:

If everything is successfully built, you will see the built PGE executables in the build-pge-cmake-release/bin subfolder - it's the compiled PGE application. You can run and use it!

P.S. If you was deploy the pre-compiled stuff, you will need to run the next command to automatically copy all necessary DLLs into PGE's binary folder. You will need to have installed 7zip to have able run this.

When everything is built, you can run the pge_editor.exe from a build-pge-cmake-release/bin directory (or from bin-cmake-release/PGE_Project when you have used `deploy` command) to run editor application or run the pge_engine.exe to launch game engine.

Building for Windows via MSYS2

Alternatively, you can build PGE with using of MSYS2 environment.

To install XCode you need to download it from your App Store.

To have correct working build scripts, you also need to install "coreutils", "binutils" and "gnu-sed"

Note: If you are using MacPorts, do those commands instead:

You have two ways to install Qt:

If you received a build errors with missing of the headers which a small bug which forces to find SDK for OS X 10.10 while you have pre-installed SDK only for 10.11. This trouble can be easily fixed with a small workaround: you will need to make a symlink to 10.11 in the SDK's folder:

Since you will run this in the terminal, build process must work correctly

You must have this tree:

To build project use the special build.sh script:

When everything will be built, you will see the built app bundles in the ./build-pge-cmake-release/bin folder.

To start usage of the editor, run the PGE Editor.app file

If you wish to make a DMG image to use your build on another computers without rebuilding, you can run the "build.sh" script with the "deploy" argument:

When deploy script will finish it's job, you will get the "bin-cmake-release/pge-project-dev-macosx.dmg" file which you can share to friends or use on another computers yourself.

Note: To have right deployment, you should build PGE with Static version of Qt.

For now is PGE Engine only can be built for Android platform.

The project you need to open and build is located in `Engine/android-project`. Until you will be able to open the project you need to initialize it: open the terminal (or Git Bash if you running on the Windows) and change current directory into `<repo>/Engine/android-project`. Then, execute the `build_init.sh`. After the build has been initialized, feel free to open it in Android Studio where you are able to run the build.

From Android Studio you can run Build->Make to just compile the project, or Build->Generate signed APK to get the ready-for-use APK. Please check both Java Key Stores.

To make it work right you will need:

file_formats.h (or any other) not found

If this file is not found, seems you forgot to download submodules.

Usually this error appears when you have an outdated submodules. If error happens outside any submodule related classes, that means a bug, caused by a missing macros or support of another operating system. Please report about this to us.

Reasons of merge conflicts are:

If you have any troubles with merge conflicts in case you didn't made any changes and you can't resolve it, just re-clone repository

If you getting this error, means you have damaged make files. To fix that you must run the ./clean_make.sh or clean_make.bat (dependent on operating system) scripts in the root of the repository

This error usually happens on Windows operating system. It means you trying to rebuild application which is still in run. If you already closed it, please check out the task manager and kill it if it has turned into zombie and still be in the memory.

Any "undefined reference" error while linking

This error means that some of dependencies is built incorrectly and lacks some of function, external variable or class. Another reason is a missing system library in the link list which is dependent on your operating system.

Note: This trouble has been resolved in latest commits of master, so, you must no more have any issues with this.

When you trying to run CMake build directly by using Ninja, keep an eye on the fact it can't correctly deal with "external projects" of CMake for the case dependent libraries are didn't built yet. However, you have a solution: at first, you need to build dependent libraries as the separated target:

On a moment when all libraries will be built, you'll be able to compile the project:

Any non-Qt components supports minimal platforms as possible as they are can (Windows XP and macOS 10.7). Qt with newer versions graduately drops support of old platforms: Platforms supported by Qt. To support certain older platform, you need to get the specified Qt version that is able to work on a wanted platform.