Yoshi is Mario's companion in many Super Mario games. His first appearance was in Super Mario World, where Mario and Luigi can ride him by jumping on him.

Yoshis come in many colors. In Super Mario World, colors indicate a special ability that gets activated by grabbing a shell. Either the shell or the Yoshi need to have the color for the power to be active:

These powers carry over to Super Mario Bros. X, with the addition that the blue Yoshi can fly when grabbing anything, not just a shell. SMBX introduces 4 new types of Yoshi's: 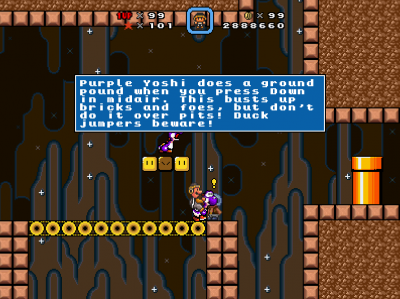 The Purple Yoshi's Ground Pound is triggered by "Down", which can lead to accidental deaths. On TheXTech (and SMR), this can be prevented by by adding ground-pound-by-alt-run = true to settings/thextech.ini, which changes the Input to "Alt Run".