This article is a stub. You can help Moondust Wiki by expanding it.

Super Mario Bros. X2 (also known as SMBX2, SMBX 2.0) is a collaborative, open-source project to improve and expand upon the original SMBX. SMBX2 was founded by Horikawa Otane and the first public build was released in December 2015.

SMBX2 is a set of multiple tools and components developed in different repositories. SMBX 1.3.0.2 is used as a base for SMBX2. Most of the new features are written in Lua.

The first announcement of the SMBX 2.0 project was published on December 2, 2015.[1] The first release was published some days later as "SMBX 2.0 Open Beta", however it was quickly replaced with Release 2 which fixed several critical bugs that had been found in it. 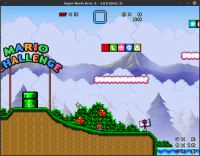 On September 20, 2016, a third release was published with a major set of additions including new blocks, new NPCs, and three new playable characters. [3] At this point the separate builds of LunaLua over SMBX 1.3 were discontinued and all updates to LunaLua were integrated solely into SMBX2.

On March 30, 2019, the SMBX2mx3 version was released. It was a preview build of SMBX2b4, with a mostly complete feature-set. The build's primary purpose was to be used for the MAGLX3 Level Contest, hence mx3.

On June 23, 2019 the PAL version was released. It fixed several issues with the SMBX2mx3 version and added some additional functionality.[4]

On January 31, 2020, the Beta 4 version was released. This update fixed several issues with the SMBX2 Beta 4 preview builds and added additional functionality. It included changes that may cause behavioral inconsistencies with levels made on preview builds or Beta 3 and is a stable release of SMBX2 sufficient for releasing episodes.

With a time, there are next minor updates has been released: