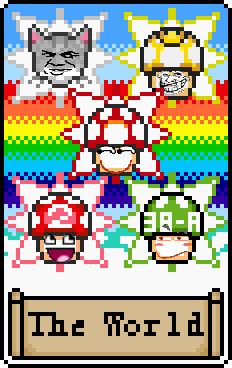 Branches of SMBX by HengShao.

---"In the beginning, there was SMBX. And God said, 'Let there be more SMBX.'

Super Mario Bros. X - (commonly known as "SMBX"', see the main article) is a Mario fan game engine, originally written by Andrew "Redigit" Spinks in 2009 on Visual Basic 6 (VB6). After the game's development was stopped, several attempts to develop a successor started independently from each other.

These are the main branches of the game: all them are in active development and maintenance (except Redigit's original branch, which was abandoned in 2011).

(Also known as Vanilla) This is the main branch of the game, the origin for all other game branches. It was released in 2009 and supported until 2011 (the last version of the game was out in October 2010). This game defines the SMBX64 standard used to declare the compatibility between different branches of SMBX. Until February 2, 2020, the game's source-code remained closed. With time, the game has attracted various modders and hackers who developed their own extensions and modifications of the game's executable file. The most notable of these modifications is the LunaDLL library made by Kil and published on the Talkhaus community forum. Later, the LunaDLL library has improved and extended by Kevsoft who added the lua scripting language into it. The library has been renamed into LunaLua, and became the base of the SMBX2-project later. 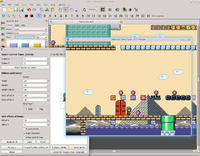 Moondust Project / Platform Game Engine Project - a project by Wohlstand founded in February 2014 after finishing the initial SMBX64 research. It consists of a game engine and a development kit for it. This is the first SMBX successor project which provides full compatibility with the original SMBX's stuff and can work with SMBX specific stuff natively: The Moondust Editor can open, edit, and play SMBX levels and episodes with TheXTech or the experimental Moondust Engine. You can edit and create new levels, world maps, NPC configs and use them in the original SMBX. The project itself has a focus on making brand new games from the ground up using the functionality of the Engine rather than being just another clone of the SMBX game. Unlike previous SMBX successors, Moondust is coded in C++ and aims to be cross-platform: It supports Linux, Windows and Mac OS X, and later Android. Unlike SMBX, Moondust is going for a multi-component system that includes Editor, Engine, and additional tools. While the engine is in a development state, the editor is using by the community as a more advanced alternate editing toolset to work with SMBX levels and episodes. 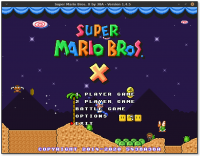 SMBX-38A, also known as SMBX 1.4 - is a Mario fan game engine, written by 5438A38A as an unofficial successor to the original Super Mario Bros. X by Redigit, developed from the ground up as a clone of SMBX with the addition of several new features. Initially it was thought to be fake. On September 13, 2015, Snoopy Tour made a post with a link to Baidu where an unofficial "SMBX 1.4.1" was published, but people did not believe him. Kevsoft looked for a download link and finally found it, downloaded a recent build from Baidu Pan, and tried to test it on Windows 7 x64, but failed. When he sent this build to Wohlstand, he found a way to run it in Windows XP using VirtualBox[1]. Later Wohlstand contacted the original author and cooperated with him. This project adds many in-game elements, majorly extends the world map functionality, and introduces its own scripting system called TeaScript which uses a VB-like language for the code. 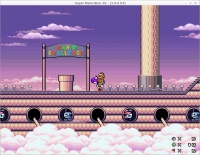 Super Mario Bros. X2 (SMBX2) - is an extension mod of SMBX 1.3, combining the LunaLua framework with the Moondust Devkit (formerly known as PGE) (mainly for using its Editor) and adding a brand-new launcher which based on Qt and WebKit (eventually replaced by QWebEngine). It was founded by Horikawa Otane in December 2015 (before that there were early preparation works done in secret). It's positioning itself as a mainstream SMBX that aims to make SMBX 1.3 obsolete, aside from its executable which is used as its core, being enhanced with hacks, extensions, and mods based on the LunaLua framework. Since SMBX2 was founded, LunaLua is no longer releasing as a standalone framework, as it was fully integrated into the SMBX2-project as its main counterpart. This game gives you a lot of new in-game elements and a powerful and flexible lua scripting system that gives a lot of customization abilities. 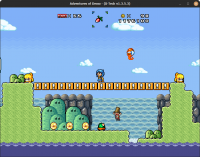 TheXTech - a platform game engine written in C++, is a full port of SMBX 1.3's source-code which was originally written in Visual Basic 6. Created by Wohlstand one month after the original SMBX's source code has been opened. It was released to the public on March 14, 2020, and has two purposes: providing a free and open-source, cross-platform, and accurate implementation of the SMBX Engine that allows playing old levels and episodes created for the original game by reproducing its behavior; get a more convenient research model for developing the Moondust Engine. Additionally, it has many functional extensions and improvements such as PNG support, GIF recording, LVLX, and WLDX formats support, using the MixerX audio library, sounds.ini and music.ini support, custom player calibrations support, fixing a bunch of vanilla bugs while providing the option to re-enable them back if needed, etc. Unlike the original game, it has support for multiple platforms and operating systems other than Windows such as Linux, macOS, Haiku, Emscripten, and Android. Windows x86_64, and ARM64 builds were also provided.

Super Mario ReInvent (formerly known as New Super Mario Bros. X) is an open-source Mario fan-game currently developed by Core. Initially, it was created as a fork of TheXTech (a C++ port of the original Super Mario Bros. X, and backward-compatible to these engines). And now, the project is going to be rebuilt into Lua using LÖVE 2D [2]

Most branches have their own set of incompatible features with others. However, there are episodes built with the SMBX64 standard following that will properly work on every branch. The case of incompatibility between each branch requires playing certain episodes on the branch for which it was targeted. Playing episodes on the incompatible engine may also cause odd gameplay behavior and unexpected appearances of elements (for example, the SMBX2 and SMBX-38A do have their different and incompatible item sets; on the other hand, Moondust Engine is able to use different configuration packages which can provide any different and incompatible item sets to play levels and episodes as expected).

There are notable early attempts to reconstruct the game but ended up being canceled or abandoned by their developers.

Super Mario Bros: Remastered (originally named New Super Mario Bros. X, NSMBX, also known as Super Mario Bros. X Remastered, SMB:R and SMBX:R) was one of the first attempts to continue SMBX after Redigit canceled it. SMB:R had the most publicity in the months of June-September 2011, so it developed the largest community of the smaller spin-off forums (later merged with Cloud's forum), despite not having much progress beyond what was publicized. Unfortunately, Project has been canceled in January of 2012. NSMBX Forums were kept as a backup discussion platform which was sometimes used while the official SMBX forums server went down.

Visual Super Mario Bros. X - project by Aero (also known as AeroMatter or GhostHawk) founded in March/April of 2012. The project was made using VisualBasic.NET on .NET Framework 4. The goal of VSMBX was to first recreate SMBX and then add on new features and content with far more flexibility. Starting December 25th of the 2014 year, the source code for VSMBX has been published for everyone. Since August 4 2016, AeroMatter announced discontinuing on his official discussion thread[3].

In addition to the projects described above, there are other less significant projects was existed.