After a bit of work, PGE Editor now has much better integration with SMBX:

LunaLua v0.7.3 is finally released! Kevsoft apologizes for long waiting, since this version has a lot of critical changes.
Please make sure that your CC12 level works with this version of LunaLua!

Recent update now finally allws us to have fixed resampling, therefore all applications which use it no longer play garbage on non-44100 hz music files! 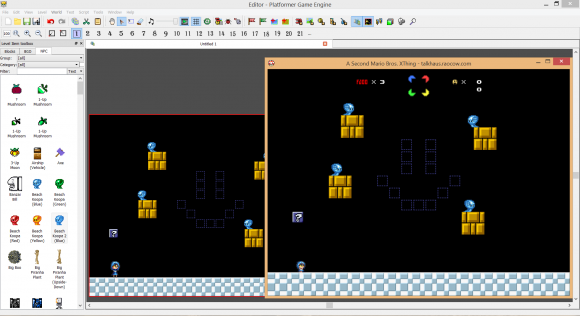 Note: Auto-starting of episode will work if you have LunaLUA 0.7.3. If you have older LunaLUA, SMBX will start in a game mode with escaping of the startup web-window, therefore to launch a level test, you should start playing episode "_temp_episode_pge" which should appear in a list.

SMBX Integration configuration package is available from the Online Installer. It also can be downloaded here.

New update completely changes NPC-Container configuration, therefore you no longer need to manually define NPC-placer button in lvl_npc.ini. Instead you have the ability to configure any NPC with special parameter even if it's stored into container (container itself no longer uses special1 field. Instead, it uses its own "content" field)

Also you can build PGE from source code yourself:
https://github.com/Wohlhabend-Networks/PGE-Project
(Note: If you get "Config pack outdated" message, ignore it until I will officially release a new update. To avoid that window you need to copy INI-files from my git repisotory and replace all files in "configs/SMBX" folder.)

Don't forget that this version is still in works and some bugs and glitches may appear, so, please report to me about any troubles and bugs with PGE Apps, and I will try to fix them.

This page has been requested 1758 times.