In my opinion,He should work together with the 2.0 Team.They have the original source code!Both,the 2.0 Team and 5438A38A are very,VERY good programmers.

38a shouldnt make profit out of this, nintendo will take it down quicker
by Hoeloe
Also, the SMBX2 developers reached out to 38A a while ago to talk about collaborating. He has been nothing but scathing towards us, and to be perfectly honest, would almost certainly hold back development of X2 if he were involved in it. We gave him a chance for us to all collaborate and work together, and instead he chose to insult us. I'm going to say it here: despite what he thinks, 38A is NOT a good programmer. The engine has some merit, but that's in spite of his skills, not because of them.
by Bigpokemonfan
Are these downloadable files safe? I afraid they contain a heuristic virus.

Edit: I forgot to mention this virus is actually Heur.AdvML.B and I don't want it block access to my computer.
by Stardown
Is the game cancelled or just delayed until further notice?
by Lx Xzit

Bigpokemonfan wrote:Are these downloadable files safe? I afraid they contain a heuristic virus.

Edit: I forgot to mention this virus is actually Heur.AdvML.B and I don't want it block access to my computer.

You ran into a false positive.
by The0x539
lol
by Minus
Speaking as somebody who has generally stayed out of the 38A vs 2.0 debates, has tried to refrain from making character judgments, and has tried to hold at least a little respect for you for what you managed to pull off, man, what is with you, dude? You complain about how nobody helps you or makes any contributions when you made the engine closed source to begin with, you complain about "cheaters" getting access to the features you locked away behind dumb mini-games, because they were supposed to endure those mini-games as "punishment" instead (in which case, if you're so put out about it, why even include them to begin with? In a community built on reverse engineering the SMBX engine, of course that's going to happen), you complain about how you don't turn any profit for your fangame of a Mario fangame, and all the while, you carry yourself with the maturity of a two-year old in your interactions with others, including those who brought your engine to the limelight in the first place and worked hard to give it the recognition they thought it deserved, and those who were interested in working with you to improve your work.

In any case, it's clear that this engine didn't give you the results you expected, so maybe it's time you take a long look at just what you were expecting. If you were expecting instant fame and fortune, maybe it's time you choose another path, because this isn't going to be the path that's going to get you there - particularly if you don't learn how to get off of your high horse and show a little bit of humility and some damn human decency to the people around you.
by DuckSalmon
Punish his own fans
Good Job Boy
by MyNameIsEric52
I don't know if i still can use your engine, but i think that was truth about you - begin a total jerk. With hiding features in minigames, you don't punish people, but you're limiting people. Not just that, but minigames are pointless and some of them are impossible. And not just that, but you're limiting your fanbase, with all those rules of bug reporting.
We didn't really made that much contributions because you're limiting everything. Source code is closed. What do you think we can do? If not that, then what about all your fans reporting a bugs to you, and making full discord servers, dedicated to you (Yoshi021), and fans, who made a really great scripts (such as Catskart). What about them?
You REALLY expected a profits from a Mario Fan game? Of course, you can create other projects, which isn't fan games, and get moneys from them, but you said about your smbx engine. If you need money, you can do everything, but expect a Nintendo to take you down, if you're making a payable mario fan game. I may be not right, but still. If its not illegial, then why do you expect people to pay you for your smbx engine, if i think theres no way to? And as i said, you could do some other stuff
Really.
You should have been expecting someone hacking your game, because you are limiting a game, a fan base. Thats why it happened.
Also punishing your fans by hiding features? Seems like theres no limitation to your contempt to your own fanbase.
Yeah, this is result of YOU begin a such person, and a result of YOU limiting your game.
Your smbx engine engine is not bad, but even you, beign a author of this game, seem like an opposite.
by Conrad.tf
If you want to get some money for your project and without being sued by Nintendo, you can open a Youtube channel and upload shitposting. Open a Patreon for the "videos" (obviously it is for the project) and voila, you will have money. Just do not mention anything about the project in the Patreon.
Please, don't delete the features
by Yoshi021
(I forgot to post this before....but I forgot)

Hey 38A, we all know you love using the "Hide Online" feature in the forums. I know you have read all of our responses and you are choosing to ignore us. Why not
answer us instead?
by MidoriNeko
I don't understand your intentions, 5438A38A. What is the thing that keeps you motivated to work on your engine? What is your goal? I doubt that it is to please the community, because obviously punishment is not a way to show that you care about it. And I don't see why you worked so much on these hidden functions, if nobody is going to be able to use them. And that is because they are locked behind minigames, some of which are impossible to beat. But why? You could easily make them accessible and I am sure that the users will be happy. And there will be nothing but positive feedback towards the engine. Haxagon was just a way to make the engine even more useful and enjoyable than it already is. But you decided to punish us because of our desire to use these features. But note that punishment and deprivation is not the right way to the success. And what exactly is the price you want us to pay for making the suggestions? We are giving them to you just so that your engine can be improved even more. We are contributing to the engine by creating levels and overall by using it and making it more popular, but if you punish us for doing so then how do you expect us to do that?

A response from you will be greatly appreciated, even though I know it is unlikely.
by DarkMatt

5438A38A wrote:As a response to cheaters...
1. The released date of smbx 1.4.5 will be postponed indefinitely, depending on my mood.
2. The hidden functions will be completely remove in smbx 1.4.5, if you map used these features, you map will be broken.
3. No documents(changlogs, script help file, example levels etc.) will be offer in smbx 1.4.5.
4. The source code will never be published.
Why did this happen?

"You can use ANY accessible tools or methods to beat this game, including calculators, search engines and other people. However, cheat engine or so-called 'debuggers' are NOT allowed."

1. I didn't get any profits from this project.
2. A lots people ignore my rules of bug reporting and feature suggestions.
3. They paid no price and made no contributions and make a ton of suggestions.
4. I add minigames as a punishment, but some people hacked it.
5. So this is the result.

You, spent a bunch of time reverse engineering a dead engine, actually did work people were impressed with, refuse to have any sort of positive relationship with other teams who have done the same thing you have, get passive aggressive with your work and the community behind it, and then just straight up say screw you all for getting disrespected, took your ball, and went home?

People DEFENDED your work. People argued on end why your work was better. People went so far as to insist to others that it'd get better, that you would support both your work and your community, that you would care for what you did. You had an actual community of people who thanked you, respected you, and defended you. If THAT doesn't make you satisfied at what you did, then why even waste that much time? I'm not even going to talk about how many times you've made mistakes. I'm just going to say you seriously need to reconsider your life goals if you wasted so much time on this, which you are kicking to the curb because you hate people.

I'm not going to take a stance on the hypotheticals; things like, "How passive aggressive were you really?" and, "Did you seriously make this to make money off it?" All that pales in comparison to the biggest issue you have, that everyone here now sees. I don't care about your reputation. I care about your actions. And there is no mystery to this latest action.

So I'm not going to ask any questions that go on about the details of your mistakes. I'm going to cut right to the chase:

Why did you even do this?

Please redeem yourself by explaining at least this. The more you run away, the more guilty you are.

You owe this not to me, not to anyone who you see as your enemies, but your community, the people who posted on this very subforum. You owe THOSE PEOPLE an explanation. A real one. Not this, "I'm done because of these reasons," half-hearted excuse for being the most irresponsible programmer I've seen in a while.
by Spectra

5438A38A wrote:4. I add minigames as a punishment, but some people hacked it.

The real question now should be: what was the offence deserving such a retribution to begins?
by TheCreator520
We've saved your engine from lacks of creativity for times . However everything you are saying is expeling and enraging your users . Since you decided to ruin both your efforts and ours , it is believable that you deserve no audiance .
by h2643

OP wrote:As a response to cheaters... 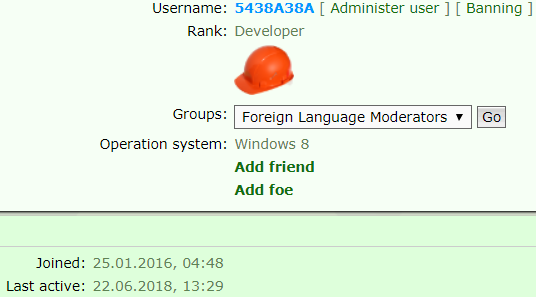 but he may have read them while being logged out...
by Yoshi021

OP wrote:As a response to cheaters...

but he may have read them while being logged out...

He goes invisible when coming to the forums.
by Lx Xzit
He can visit the forum as a guest. Also in fact, that hidden user was not 38A (I've been other hidden users aside from him). If it was 5438A38A his last active date would have changed
All times are UTC+03:00
Page 30 of 42