by skyblueyoshi
38A doesn't cancel his project and SMBX-38A is still under development. SMBX 1.4.5 will add more interesting elements of Super Mario Maker & Super Mario Maker 2, as well as more powerful editing functions. The new version will be released after the performance test is completed. 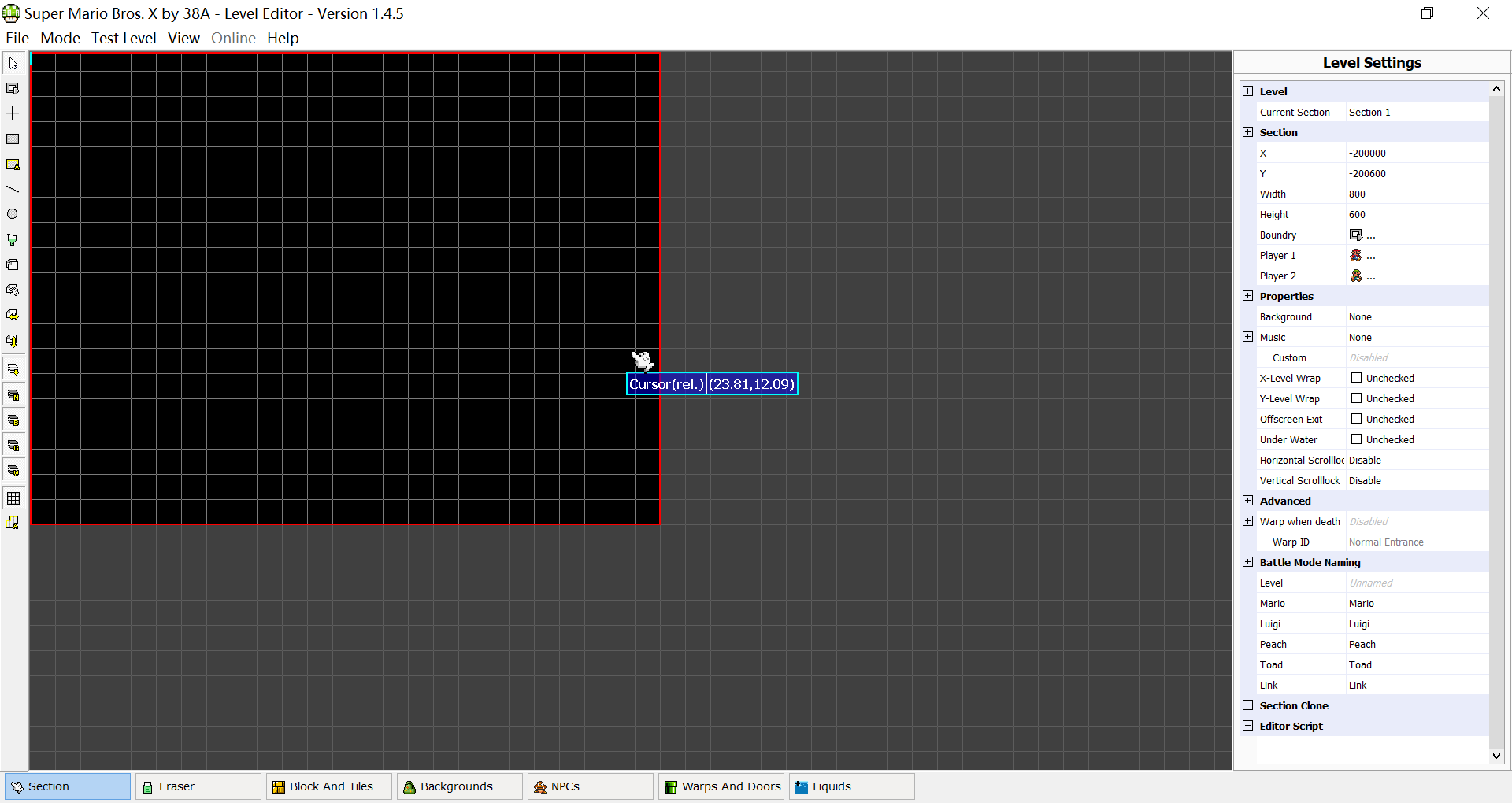 by Wohlstand
Good!
Related to PGE Editor: Yeah, I had an idea to use QPropertiesBrowser on everything to make minimalistic and handy properties UI, and this concept showing that it's looks good!

by 3color BombDX
skyblueyoshi, where did you get this information?
by Forested Gamer
I think this is real because skyblueyoshi was 1.3 discovery finder search google find more about it.

Added after 2 hours 35 minutes:
I just noticee that the page url where screenshot coming confirms that its real skyblueyoshi.
by Lx Xzit
I wonder what "Editor Script" contains.

However, I have a little concern about this:

The pipe is facing the opposite direction.

by Yave Yu
Waiting for 1.4.5 release.
But some levels which uses easter egg functions will not compatible in 1.4.5, it's terrible.
by HengShao
Ah hah,that looks interesting~ #(Funny Face)
by Eri7
I hope it does come out but i am afraid just how many stuff will break if 38A really decided to remove all of the secret features and functions...
by TheCreator520
Good lord, it is getting funnier and more awkward.
by MmmMario

TheCreator520 wrote:Good lord, it is getting funnier and more awkward.

BOTH THECREATOR520 AND 5438A38A ARE BACK.
by Oldinameste
Is there any evidence that this is not a fake?...
by Wohlstand

Oldinameste wrote:Is there any evidence that this is not a fake?...

In the 38A Discord server we have discussed out the thing, and it's possible fake, or... mention to another game engine called as "NSMX" we have found here: http://blueyoshi.cn/nsmx/index However, downloads are mirrored to here http://wohlsoft.ru/docs/Collected/NSMX/ because of Baidu Pan that gives no way to download if visitor has no Baidu account that now is impossible to get without having Chinese cell phone number.

And what we can see:
- It's Chinese only, and completely unreadable without switching of default ANSI charset into GB2312. The biggest con of VisualBasic environment that it doesn't support Unicode, therefore non-ASCII apps will be unreadable on foreign computers.
- It's unworkable, even after switching of ANSI locale to Chinese and international standards into Chinese: it will crash with "Precedure not found" on game start, or in Editor on an attempt to load any random level. No matter where: Wine, Windows 7, or Windows XP. However, some guys are got it working, but it will still crash after few time.
- SMX has founded in 2008 even before SMBX was founded.
- SMX/NSMX is completely unrelated to SMBX, but, looks similar.
- I have found NSMX also uses my VB6 binding of my SDL Mixer X

If you are really the same SkyBlueYoshi who is creator of (N)SMX, I wanna have some private conversation with you via any convenient way (PM here on forums, Discord, QQ, email, etc.)
by Lx Xzit

Oldinameste wrote:Is there any evidence that this is not a fake?...

This is what I found:

But some levels which uses easter egg functions will not compatible in 1.4.5, it's terrible.

I'm terribly worried about this, as I've been saying several times, almost all my scripts will become broken if 38A deletes arrays. I am willing to rewrite them as long as there's a good method to filter IDs of blocks/npcs without having to add +80 conditions in a single line. I'm ok with everything else, but this really worries me a lot!
by Eri7
I too am hoping 38A doesn't delete all of the hidden functions and features since i have used some of them and having them getting deleted will ruin some of my levels

Eri7 wrote:I too am hoping 38A doesn't delete all of the hidden functions and features since i have used some of them and having them getting deleted will ruin some of my levels

Anyway, be ready to meet a worst case when 38A will ruin hidden features, it's may happen or may not, but be ready and make an alternative variant of your level that will don't use hiddens.
by Lx Xzit
It's confirmed. It's real:

wait, "curve wrecker" has two meaning that are the opposite of each other, now I'm just confused
by DerEric
So this is real?
Cool!
by Stardown
I haven't made any levels that use these hidden codes. It's the lack of changelog I'm worried about. I guess we can come up with our own changelog.
All times are UTC+03:00
Page 1 of 2